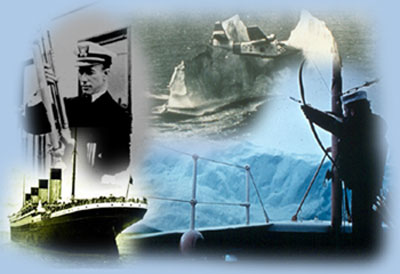 From the earliest journeys into the North Atlantic, icebergs have threatened vessels. A review of the history of navigation prior to the turn of the century shows an extensive number of casualties occurred in the vicinity of the Grand Banks. For example, the LADY OF THE LAKE sank in 1833 with a loss of 70. Between 1882 and 1890, 14 vessels were lost and 40 seriously damaged due to ice. This does not include the large number of whaling and fishing vessels lost or damaged by ice. It took one of the greatest marine disasters of all time to arouse public demand for international cooperative action to deal with the navigational hazard. This disaster, the sinking of the RMS TITANIC on April 15, 1912, was the force that established the International Ice Patrol.

On her maiden voyage from Southhampton, Englandbound for New York, the TITANIC collided with an iceberg just south of the tail of the Grand Banks and sank within two-and-a-half hours. Although the night was clear and seas were calm, the loss of life was enormous with more than 1,500 of the 2,224 passengers and crew perishing. The vessel had been built with the latest safety design, featuring compartmentation and such innovations as automatically closing water tight doors. It is ironic that publicity regarding these features had given it the reputation of being unsinkable.

Loss of the TITANIC gripped the world with a chilling awareness of an iceberg's potential for tragedy. The sheer dimensions of the TITANIC disaster created sufficient public reaction on both sides of the Atlantic to prod reluctant governments into action, producing the first Safety of Life at Sea (SOLAS) convention in 1914. The degree of international cooperation required to produce such an unprecedented document was truly remarkable and probably could not have been achieved during this period without the catalyst provided by this incident.