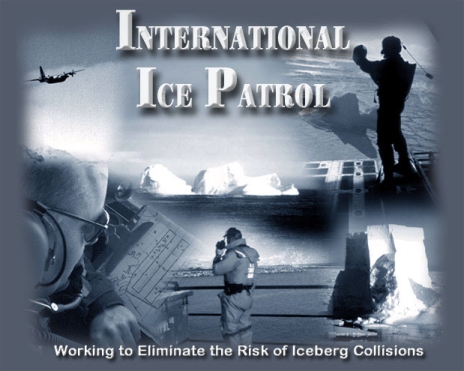 Monitor the iceberg danger in the North Atlantic Ocean and provide relevant iceberg warning products to the maritime community.

Eliminate the risk of iceberg collision.

Promote safe navigation of the Northwest Atlantic Ocean when the danger of iceberg collision exists.

The ice season runs from February 1st through July 31, during which the U.S. Coast Guard International Ice Patrol actively patrols the area of the Grand Banks of Newfoundland for the extent of iceberg danger. During the off season this responsibility is transferred to the Canadian Ice Service, who works closely with the International Ice Patrol under the North American Ice Service (NAIS). This partnership ensures accurate products are delivered to mariners year-round. The 1992 season, the longest on record, ran from March 7th through September 26th, 203 days. Except during unusually heavy ice years, the Grand Banks are normally free of ice from August through January.

The activities of the International Ice Patrol are delineated by treaty and U.S. law to encompass only those ice regions of the North Atlantic Ocean through which the major trans-Atlantic tracks pass. There remain other areas of ice danger where shipping must exercise extreme caution. A tragic example of this occurred on January 30, 1959 when S.S. HANSHEDTOFT struck an iceberg about 40 miles south of Cape Farewell, Greenland. On her maiden voyage, this ship, equipped with the latest electronic aids, sank without a trace, taking with it the 95 passengers and crew on board.

Fixed wing Coast Guard aircraft conduct the primary reconnaissance work for the Ice Patrol. Ice reconnaissance flights are made on the average of five days every other week during the ice season. The mainstay of the Ice Patrol flights since 1962 has been the C-130 long range surveillance aircraft. IIP is currently using the HC-130J model operated out of Elizabeth City, NC. The usual patrol time for these long range multi-engine planes is between 5 to 7 hours, with each flight covering an expanse of water of 30,000 square miles or more. Information concerning ice conditions is collected primarily from air surveillance flights and ships operating in or passing through the ice area.

All the iceberg data are fed into a computer model at the IIP Operations Center along with ocean current and wind data. Using this information, the model predicts the drift of the icebergs. Each day, the predicted iceberg locations are used to estimate the iceberg limit. This limit is incorporated into our daily products, the NAIS Iceberg Bulletin and NAIS Iceberg Chart. These products are available to users and the general public by several means, including INMARSAT SafetyNet, NAVTEX, SITOR, and the world-wide web.

Except for the years of the two World Wars, the International Ice Patrol has conducted each season since 1913. During the period the Ice Patrol has amassed an enviable safety record with not a single reported loss of life or property due to collision with an iceberg outside the advertised limit in the vicinity of the Grand Banks. However, the potential for a catastrophe still exists, as evidenced by numerous collisions with icebergs by ships transiting through the Ice Patrol iceberg limit through the years.  You may view the history of the International Ice Patrol in more detail in our IIP History section.