Most of the icebergs originating from the glaciers along the northwest coast of Greenland first move northward and begin a counter-clockwise journey around Baffin Bay (see map below).  Eventually, they begin a southward voyage toward the major transatlantic shipping lanes, first in the Baffin Island Current and finally in the Labrador Current (LC). The main branch of the LC, a cold and relatively freshwater current, flows southward along the edge of the continental shelf off the coast of Labrador.  It is usually referred to as the Offshore Branch of the Labrador Current. Eventually, it reaches the Grand Banks of Newfoundland where most of it flows southward through the Flemish Pass and along the east side of the Grand Banks. There is a complex and weaker southward flowing current system among the various banks and continental shelf off Labrador. This current, referred to as the Inshore Branch of the LC, eventually flows close to the Newfoundland Coast sometimes bearing icebergs close to shore. 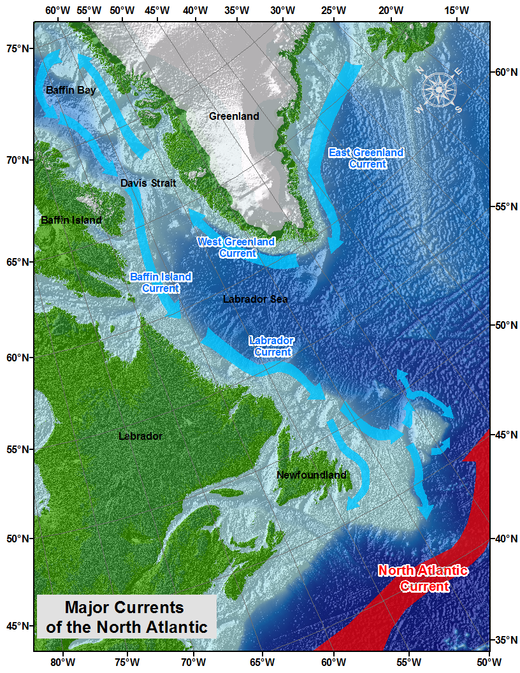 There are two reasons why the offshore branch of the LC is IIP’s primary concern.  First, its direction of flow is almost directly southward and can carry icebergs quickly from the north.  Second, the LC water is cold, essentially preserving icebergs from rapid warm water deterioration as they move into the shipping lanes. The Offshore Branch of the LC, particularly in the vicinity of the Grand Banks, is sometimes referred to as “Iceberg Alley”.

As the LC reaches the southern most part of the Grand Banks it begins interacting with the Gulf Stream, which brings warm, and relatively salty, waters northward. The clash between these two diverse currents creates an enormously complicated and dynamic current regime and the persistent foggy conditions for which the Grand Banks are famous.